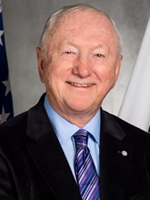 Mike Schaefer made history on January 7, 2019 in Sacramento when he took his Oath of Office as a member of the California State Board of Equalization from Governor Gavin Newsom, becoming the oldest freshman constitutional officer in state history.

Mike Schaefer serves as Vice Chair of the California State Board of Equalization, the only publicly elected tax commission in the United States. He represents 10 million people in five Southern California counties including San Diego, Orange, Riverside, San Bernardino and Imperial.

In 1965, when he was 27 years old, Mike also made history as the youngest person ever elected to the San Diego City Council, where he served for two terms.

Mike was born and raised in San Diego and attended schools in Hillcrest and Pacific Beach. He did undergraduate work at San Diego State and Notre Dame University, ultimately receiving a business degree from U.C. Berkeley and a law degree from Georgetown University.

Mike Schaefer began his lifelong career in politics, government, and the law by volunteering as a driver for John F. Kennedy's 1960 presidential campaign during the Democratic National Convention in Los Angeles. Since then Mike has served the public working in city, county, state, and federal government positions.

After graduation he worked as an investigator and financial analyst for the U.S. Securities and Exchange Commission and as a staff assistant for California U.S. Senator Thomas Kuchel.

Mike served on the San Diego City Council for two terms, from 1965 to 1971, representing a district in southeast San Diego. His tenure was highlighted by many accomplishments including the creation of community identification markers, which are still seen everywhere today, and the establishment of free parking on Veterans Day.

Following his tenure with the city attorney's office, Mike went into private practice and became a champion for fair and equitable election law.

In 1972, he sued the San Diego County Registrar of Voters over the practice of listing candidates' names on ballots in alphabetical order. In Sumner v. Sexton, the court ruled that this kind of listing was a denial of equal protection and mandated in its place the random system that is used today. This decision was later codified in California Elections Code section 13112.

In Canaan v. Abdelnour, Mike sued the City of San Diego, which had barred write-in candidates. The California Supreme Court ultimately ruled in his favor against the city, permitting write-ins in local and state elections. (The U.S. Supreme Court later determined that the ruling does not apply to federal elections.)

In Schaefer v. Townsend, a case that he brought in 2000, the 9th Circuit Court of Appeals accepted his argument that a state may not enact residence requirements for federal candidates. In a decision applicable to all 50 states, the court found that only the U.S. Constitution may limit candidacies for the U.S. House and U.S. Senate.

Mike Schaefer's work as an attorney has also included cases before the State Board of Equalization, where he won substantial reductions in assessed valuation for homeowners. Mike supported the enactment of Proposition 13 and has pledged to protect its foundational principle of helping homeowners remain in their residences.

Mike has been a leader in his local Kiwanis and Rotary Clubs and is an active supporter of the San Diego Zoo and the San Diego Animal Rescue Mission.

He has two sons, Derek, who helps produce the Coachella Music Festival as a VP /General Manager of LA Touring at AEG Presents, and Michael, who is a housing manager in Las Vegas.